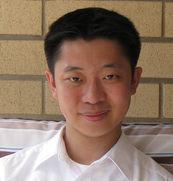 Richard Ho is a children's book author who was once, himself, a child.

At least that's what his parents tell him.

During his childhood, he harbored perfectly reasonable career aspirations: professional basketball player, astrophysicist, and Jedi master. When he "grew up," he studied English and literature in college, worked as a magazine journalist, and eventually became a scriptwriter and editor for an educational website. At some point (probably after his own children arrived on the scene), the thought of writing children's books popped into his head. He hasn't been able to shake it loose since.

His first picture book, Red Rover: Curiosity on Mars, was published by Roaring Brook Press in 2019.

Richard is a member of the Society of Children's Book Writers and Illustrators. In his wildest daydreams, he is also a member of the New York Knicks, the American Astronomical Society, and the Jedi Order.